It was the summer of 1992, after my first year at university, we thought we were worldly wise – but we were not! We had spent a few weeks in Canada and then travelled down to Boston with the intention of staying in a pre-booked Youth Hostel. Having had a relatively interesting day in Boston, we went to find our accommodation, only to discover that according to them we did not exist. The law of travelling decrees that you are better off heading to where you are going, than hanging about where you have already been, and as we were heading to New York, off we went!

We got to the Greyhound station, bought our ticket, and got on the bus – easy! It was late and dark, so we did not have any real sense of time or location, but as long as we got there, we didn’t care. September 1992 – was BEFORE New York’s well documented clean-up campaign.

The Longest Night of my Life

On arrival at Port Authority Bus station, New York at 3.00am we were told on NO ACCOUNT to leave the bus station waiting room because it was an extremely dangerous place. The longest night of my life was about to begin. We arrived in the most disgusting room you have ever seen, it was brown and orange 1970s tiles from top to bottom, with a multi-layer of grime, nicotine and a multitude of other diseases. In my memories it is the NYPD lock up cell from the set of the 1980’s police shows. We felt like we were in prison for the night – but without the prison guards to protect us.

I looked around and took a seat in what I thought was the least offensive spaces, and then the fun really started.

To my left was someone with a very serious respiratory problem who was bringing up copious amount of phlegm and then spitting in on the floor (hockling as us Geordies would say…) I can’t describe him other than he looked like Kenny Off South Park, with his parker hood pulled over his face. To the right of me was a rather large woman of the night with tight blue spangly hot pants, and the world weary look of having survived another night.

Just as boredom started to set in, a middle aged black man with a plastic cup arrived. He plonked his cup in front of me and sang, rather beautifully, ‘Wind Beneath my Wings’. I thought this was just for me until – as he waved his arms in a bird like fashion – he informed me that he did the actions so that ‘deaf people could get God’s message too’. Thankfully, after a few more lines he moved on.

Can I sit with you, because you look friendly…

I resolved to look steadfastly at the floor to avoid any more eye contact or song contact with anyone else, then someone sat beside me. His opening line was ‘Can I sit with you, because you look friendly, and I am scared?’ He then went on to tell me that he was from North Carolina, was on his way to college with all of his bags when a homeless person had asked for a hotdog. He had put his stuff down to buy the hot dog, and the homeless man had promptly disappeared with his bags. His mother had saved for years for all of this, and he said he was in big trouble. He warned me not to trust anyone – there was no fear of that, I really didn’t feel like trusting anyone.

It got to 6.00am, and we decided we could venture out. We made our way out of the hell like conditions towards the chinks of light. We arrived above ground and stopped a woman to ask where were were so we could get our bearings. With an incredulous tone in her voice she told us we were in Times Square! We clearly presented ourselves as the naïve travellers we clearly were. But, we were in public, we were safe, and we were free.

We read our copy of ‘Let’s Go USA’ after our mini adventure, and in the New York bus section it had in bold capital letters – ON NO ACCOUNT GO TO PORT AUTHORITY BUS STATION AT NIGHT. MMMM… too late for us, but on reflection, we were safe, I had had one of the most memorable and entertaining nights of my life and I had learnt to ALWAYS read the guide BEFORE you leave – a message I am imparting on you all too. Funnily enough, I haven’t been on a Greyhound bus since.

Task: The Bus Journey from Hell 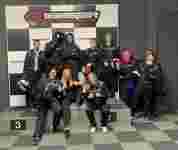 Building Self-Belief worked with a group of 10 boys form Norham High School in NorthTyneside. It was a real privilege to work with the boys and see them grow in confidence and develop a much greater sense of purpose in their lives.

A committed team of Trustees have come together to launch a new charity in County Durham to help young people get the best possible start in life through empowerment and increasing personal self-esteem.

Helen Cowan | Founder of The Tall Wall and Executive Coach

Helen describes how her positions at KPMG evolved into her creating her own company as a collective of executive coaches. She gives young people brilliant advice about how to create a positive approach to embarking on a career.